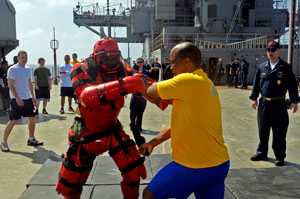 Violence is shockingly common these days, which is why it’s more important than ever to learn a few self-defense takedown techniques.

The good news is, you don’t have to be a black belt in order to defend yourself and your loved ones from a physical attack.

While learning a martial art could be beneficial, there are several basic self-defense moves you can pick up in an afternoon.

Below are seven simple but effective takedown techniques that anyone can do (and ever prepper should learn).

Be warned: these are not fair fighting techniques.

But street fights aren’t fair, and if someone attacks and makes you fear for your safety, I feel it’s completely justified to use any technique available in order to escape unharmed.

The elbow is one of the hardest and sharpest points on your body.

Combine that with some momentum directed at a vulnerable target, and you have a potentially devastating way to knock out an attacker.

The Marine Corps lists the throat as an ideal target for punches and uppercuts if you find yourself in a close-quarters fight.

The reason is that even a modest punch to the throat is going to put your attacker in immense pain and throw them off balance.

This gives you time to escape or follow-up with another move.

The up knee is a rising strike to your opponent’s head, chest, or stomach.

It can be a good follow-up if you’ve thrown your attacker off balance.

The eye gouge is exactly what it sounds like and should only be utilized in life or death situations.

In the video below, you can witness just how quickly a “poke” in the eye can end a fight.

One downside is that eye gouging can be a difficult technique to practice, but one workaround I’ve seen mentioned is to use a hockey mask taped to a striking pad.

This will allow you and a partner to take turns practicing with a moving target.

The techniques on this list have focused on face-to-face combat, but the bear hug escape is a very useful move to know if you’re ever attacked from behind.

Here’s a video with an Army Ranger demonstrating how to combine some of the techniques on this list for effective self-defense.