Most of us are aware of the basic hydrogen peroxide uses for survival, such as disinfecting scrapes, cuts and other wounds.

However, there’s a multitude of other hydrogen peroxide uses just waiting to be discovered by the majority of preppers.

For instance, not only can this magnificent liquid help your plants grow, but it can also fight deadly disease in a way you might not think.

Plus a LOT more.

Best yet, hydrogen peroxide is extremely inexpensive, making it one of the cheapest and most versatile survival tools you can have in your bug out bag.

If you aren’t prepared to utilize these hydrogen peroxide uses in an emergency, you could be putting yourself at a MAJOR disadvantage in the field.

I take it as my responsibility to help ensure you are as prepared as possible for what’s up ahead. That’s why I need to inform you about these…

9 Hydrogen Peroxide Uses For When SHTF

Mold can become deadly if you don’t kill it ASAP, especially to those with compromised immune systems.

Thankfully, hydrogen peroxide can do the job quite easily. Simply pour 3% hydrogen peroxide into a dark colored spray bottle and spray it directly on the mold site. Leave for about 15 minutes, and then wipe it up using a clean sponge or towel.

Note: It’s very important you wear a protective mask over your nose and throat while cleaning up mold, as you can easily inhale mold spores without it (ultimately leading to sickness and a variety of negative side effects).

Ear infections, bacteria, and even the common cold can be stopped in their tracks with the help of hydrogen peroxide.

Simply pour 3% hydrogen peroxide into a clean eye dropper, tilt your head, and pour 2-3 drops of it into one ear. Keep your head tilted and let the peroxide fizz for about 10 minutes; then tilt your head the opposite direction to let the liquid drain out.

Repeat the process for the other ear.

One of the biggest concerns you can face when you bug in is the threat of airborne germs, which can cause sickness to spread among the household very quickly.

In order to help prevent this, pour a pint of 3% hydrogen peroxide for every gallon of water you add to your humidifier. Let the machine run, and the peroxide will work to kill the bacteria and germs hanging out in your home.

Few preppers know that hydrogen peroxide is actually capable of purifying water, and works safely and effectively to remove the bacteria found in rivers, streams, and other unclean water sources.

However, there’s a trick to doing it right; it’s imperative you use 35% food grade hydrogen peroxide. It is also critical you don’t spill this on you, as undiluted peroxide of this concentration will quickly eat away at your skin.

For best results, combine 1/8 cup 35% food grade hydrogen peroxide with a gallon of unpurified water. Mix together and stir well, then let the mixture sit for 20 minutes before drinking. This will allow enough time for the peroxide to oxidize the water.

Sinus infections can be one of the most irritating and painful things to have. And, in an SHTF situation, this infection can worsen quickly if you don’t have the resources to stop it fast.

One way to take care of the issue is to create a nasal spray out of 3% hydrogen peroxide. Combine the peroxide with a cup of water (which must have ZERO chlorine in it) into a squeeze bottle, and spray up the nose two times in each nostril.

Note: Be sure to use a dark-colored bottle for this, as sunlight drastically reduces the peroxide’s effectiveness.

Boils are generally caused by bacteria, and can worsen quickly if left untreated. Luckily, you can soothe them with the help of hydrogen peroxide.

Add 1 cup 3% hydrogen peroxide to a standard sized bathtub filled with water. Make sure the tub is filled completely to ensure proper dilution.

Lay in the bathtub and feel the relief as the peroxide gently begins to wash away the bacteria and heal your boils.

Make sure to only soak in the tub for up to 30 minutes, and be sure to only use this bath every so often in order to prevent skin irritation and/or skin damage.

Dump out the mixture in the morning, and then make another water-peroxide mixture, adding equal parts of hydrogen peroxide and water, in order to rinse your seeds. Do this 1-2 times per day until you’re ready to plant.

Whether you get the last bunch of produce from the grocery store or you get your veggies from another party, the fact is you don’t know exactly what (or who) has touched that produce before you got your hands on it.

To stay on the safe side, you can remove the dirt, wax, and bacteria residing on your fruits and vegetables by giving them a refreshing peroxide-water bath.

Simply fill your sink with water and add 1/4 cup of 3% hydrogen peroxide. You can now use this liquid to rinse off your produce to ensure it is safe to eat.

Hydrogen peroxide is so useful that it’s one of those survival tools every prepper wants to get their hands on. However, many preppers out there are not so lucky, as they’ve either forgotten to bring peroxide with them or have run out of their supply.

Now as I said, hydrogen peroxide (especially the 3% version) has a TON of survival uses; in fact, it has WAY more than nine.

Because I believe in this survival tool so much, I’ve included two additional videos below to help you see even more ways you can use this miracle liquid in your preps and emergency situations. Enjoy.

Isn’t it amazing what hydrogen peroxide can do?!

I think we can all agree that hydrogen peroxide is a pretty amazing invention that can really come in handy in a survival situation – particularly when it comes to cleaning out wounds, scrapes, sores, etc.

Now although hydrogen peroxide is great and hugely beneficial, we have to keep in mind that it isn’t a fix-all in a medical emergency.

There are many other medical supplies you’ll need, such as gauze, bandages, abdominal pads, antibiotic ointment, etc. in order to stop someone from bleeding, as well as to properly dress and heal a wound.

Note: Need some practical tips on how to stop someone from bleeding out in a crisis? We can help you out here.

As such, it’s important that you always have a substantial amount of medical supplies on you for just such an occasion. That’s why I personally love my 498-piece Trauma Kit.

This incredible survival kit truly has everything you need in a medical emergency; it boasts 498 pieces of essential, life-saving emergency gear to help you and your group stay alive.

This first-aid kit’s contents contain the absolute survival essentials such as hydrogen peroxide (of course), abdominal pads, gauze pads/rolls, and a wide assortment of bandages.

However, the cool thing about this emergency kit is it also contains TONS of first-aid supplies most preppers don’t even think to pack (but should), such as: a wire splint, medical tourniquets, sterile multi trauma dressings, disposable padded splints, eye wash solution, burn dressings, a heavy duty folding stretcher, mylar blankets, medical gloves, 12-hr light sticks, and even a sterile syringe.

Plus so much more.

Better yet, our Trauma Kit has the ability to heal and bandage a total of 25 people, making it an essential companion on a group bug out trip. However, you’d never know it from its size, since all its medical contents are packaged safely in an easy to carry, heavy duty duffle bag.

This medical kit is also an absolute must-have in businesses, schools, and organizations.

After all, when SHTF you might not be able to bug out – in fact, an emergency could happen at your place of business, at your school, or even at your church or neighborhood YMCA.

And, if you live in an urban or highly populated area, you can bet you’ll be able to save a lot of lives with the contents of this kit.

It’s imperative to be prepared for any and every emergency situation that could occur. And, especially in an SHTF situation, it’s crucial that you stop the bleeding and prevent infection as soon as possible to help yourself and others stay safe and healthy.

This life-saving first-aid kit will help give you the confidence to take charge in a medical emergency and to assist others (and heal yourself) in the middle of a crisis.

Used by EMTs and businessmen alike, this is truly one of the most important survival tools you can ever have with you.

Grab one of our 498-piece Trauma Kits today to have the life-saving confidence and assurance only preparedness can bring in a medical emergency. 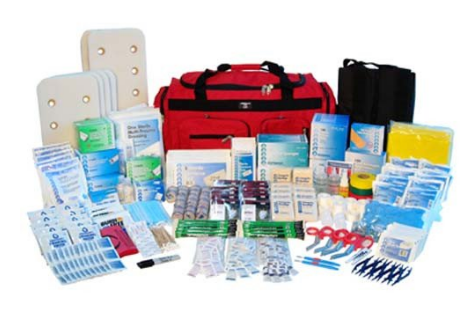